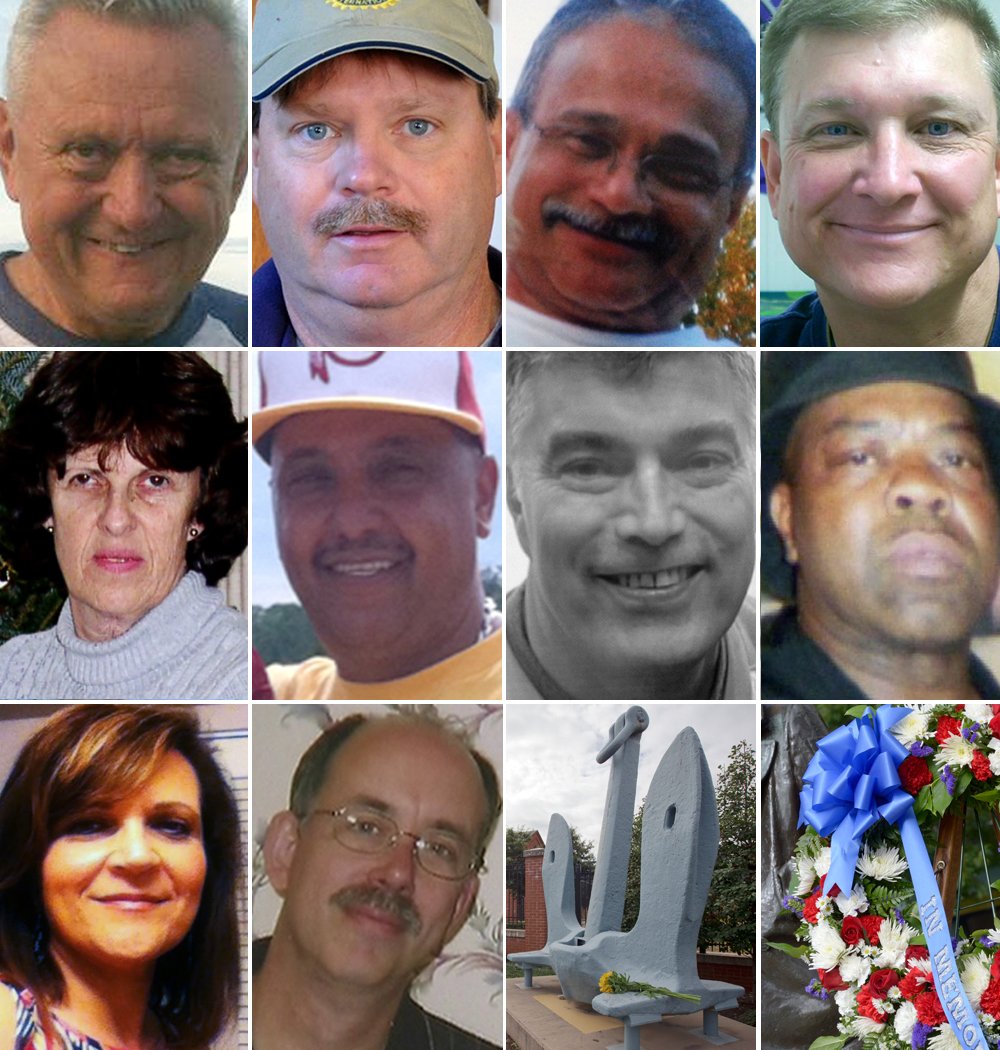 Among the dozen people gunned down at the Washington Navy Yard shooting Monday were mothers, fathers, husbands and wives whose families waited anxiously to hear whether their relatives were among the victims in the deadliest mass shooting since Sandy Hook Elementary School.

While much is still unknown about the gunman — identified by authorities as 34-year-old former Navy reservist Aaron Alexis — authorities have released of the names of the victims.

Here are some of their stories:

A 29-year Navy veteran from Virginia, Arnold retired last October, The Associated Press reported, citing an article in the Navy Supply Corps Newsletter. He was building a light airplane at his Lorton, Va., home, his uncle told the AP.

"It would have been the first plane he ever owned," said his uncle, Steve Hunter. "It's partially assembled in his basement."

Arnold held two master's degrees from the University of Washington in Seattle and was working with a team at the Navy Yard that designed amphibious assault vehicles for the Marine Corps, his uncle told the AP. He had been married to his wife for more than three decades, Hunter said, and had two grown sons.

"He was a loving son of his mother and his wife and a great father to his kids," Hunter told the AP. "It's tragic. How can you get up in the morning and go to work and have that happen? How do bad things like that happen to good people?"

Frasier had worked for four years with the Naval Sea Systems Command, according to a LinkedIn profile that bears her name. Relatives of Frasier, one of seven children, gathered at a family house in Prince George's County on Monday, according to The Washington Post.

"No matter how we feel, no matter what information we get from the FBI, we have got to forgive," Frasier's sister Wendy Edmonds, 52, told the newspaper. "We have to forgive. We can't become bitter."

Frasier studied at Strayer University and completed her bachelor of science in computer information systems in 2000, according to the LinkedIn profile. She went on to receive her master's in information systems from Strayer in 2002, the profile says.

Douglass Gaarde, the husband of Navy Yard shooting victim Kathy Gaarde, talks about how his wife of 38 years was supposed to retire from her post at the Naval Sea Systems Command, but stayed on to help their son with tuition.

A beloved wife and mother, Gaarde worked as a financial analyst at the shipyards.

"We got married in 1975. I've known her for 42 years, 38 of that married," her husband, Douglass, told NBC News. "I've lost my life partner. She was my partner. That's a hole that just will never be filled."

In an email to the AP, Douglass wrote: "We were just starting to plan our retirement activities and now none of that matters. It hasn't fully sunk in yet but I know I already dearly miss her."

Douglass Gaarde said his wife was deeply devoted to animals.

"From the day we met, we've always had three cats, right up until we got our first dog in the 2000s. ... That's why we've asked for any donations to be donated to the Humane Society."

Jessica Gaarde, their daughter, said her mom would "do anything for animals, even in extremes. There was nothing she wouldn't do."

Gaarde was also an avid Washington Capitals fan, according to a statement attached to the family's front door Tuesday and signed by Douglass Gaarde. A native of Chicago, she graduated from Florida State University, according to the statement, and had lived in the D.C. area with her family for close to four decades. This photo provided by the Rotary Club of Lexington Park shows Frank Kohler.

A past president of the Rotary Club in Lexington Park, Md., Kohler had been working as a consultant for the last two years with the Naval Sea Systems Command, according to a press release from his employer, Cara Noland, president and chief executive of Information Concepts in Management (ICON).

Kohler had worked for more than 19 years in the information technology systems and network engineering fields, according to a brief employee profile on the ICON website.

After his Rotary presidency ended, Kohler was "King Oyster" at the club's annual festival honoring the region's iconic bivalve, according to Jack Pappas, the current president of the Lexington Park chapter. An undated photo of Kenneth Proctor provided by his ex-wife, Evelyn Proctor. Kenneth Proctor was one of the victims of the shooting rampage at the Washington Navy Yard on Monday.

A civilian employee at the shipyards who had spent 22 years working for the federal government, Proctor had called his ex-wife on Monday morning, she told the AP.

The high school sweethearts married in 1994 before divorcing this year, the AP reported. They shared custody of their two boys, ages 15 and 17.

"He loved the Redskins. Loved his kids — a very loving, caring, gentle person. His kids meant a lot to him," Evelyn Proctor told the AP.

"Kenneth was a very loving and caring person," his ex-wife said in a statement. "He was a hard worker and loved his boys dearly. This is a great tragedy to our family. He will be missed dearly. Please pray for our family." Vishnu B. "Kisan" Pandit, a victim of the Washington Navy Yard shooting.

A native of Bombay, India, Pandit moved to the U.S. in 1974 and attended the University of Michigan, where he completed his graduate studies, according to a statement his family released Tuesday. He was described as a "kind and gentle man who loved his family, friends, dog, and job."

"Kisan took great pride in being employed by the United States Navy, which he very proudly served in various capacities as a civilian for over 25 years," according to the statement. "Kisan felt extremely privileged to have contributed to the superiority of the U.S. Navy and the country that he served."

Reston, Va., resident Knight was an information technology specialist who had just recently celebrated two milestones: a big promotion and the marriage of her older daughter, her mother told the AP.

She had recently been promoted at work to GS 15 — the top civil service pay grade, her mother told the wire service. And just last month, her older daughter, Nicole, married a soldier.

A native of Germany, where her Green Beret father was once stationed, Knight moved to the U.S. at about 10, when the family was transferred to Fort Bragg, N.C., according to the AP. She later attended the University of North Carolina at Chapel Hill, where she excelled, DeLorenzo said.

Knight and her younger daughter, Daniel, were sharing a house while the young woman attended college, DeLorenzo told the AP. The father of three girls ages 16 to 23 started life in Woodbury, N.J., according to an obituary notice released Tuesday. He graduated from the Naval Academy in 1981. A devoted fan of the Boston Bruins, Bodrog was active in his church and taught Sunday school, according to the notice. In addition to his daughters, Bodrog is survived by his wife of 25 years, Melanie, whom he first met while she was serving on active duty as a Navy nurse, according to the AP.

His four adult step-daughters were not surprised when Johnson did not call them after the shooting on Monday — he hardly ever used a cellphone. After driving down to the scene that evening, however, they discovered that their father, a logistics engineer, was among the victims.

Karin Johnson and Erin Zagami, the daughters of Navy Yard shooting victim John Johnson, recall worrying about their father and remember the "larger-than-life" man who "loved everybody."

The oldest of the victims, Johnson had studied mathematics at the Pacific Lutheran University in Tacoma, Wash., according to the AP.  He had most recently worked with TWD & Associates, Inc., where colleagues knew him as a good-natured, hard-working guy who went by “J.J.”

Johnson would have turned 74 on Oct. 7, according to the AP. In addition to his step-daughters, he is survived by his wife of almost a decade, Judy.

A devoted father, Westminster, Md., resident Ridgell was an assistant coach for Westminster Jaycees Girls Softball. His older daughter, Megan, was once on the team, and his younger daughter, Maddi, was still on the roster when her father died, according to the Carroll County Times. "Mike was the kind of guy that you would want your daughter to be coached by," fellow coach Tom Whitcomb told the newspaper. "He was always positive. He was always encouraging."

Ridgell had worked as a security officer at the Navy Yard. After serving nearly 20 years as a Maryland State Police trooper he resigned in 2000 with the rank of corporal, according to the newspaper. He was a 1979 graduate of Brooklyn Park High School.

The 12 men and women gunned down at the Washington Navy Yard came from all walks of life and had their lives stolen in one senseless moment. NBC's Tom Costello reports.